Swinging for the Fences: Transmission of Culture — A Hen is an Egg’s Way of Making Another Egg

One of the four dynamics, or magnets, I cited in the first round was “The Transmission of Culture Through Time.” This idea –this phenomenon—is quite central to the larger, deeper ideas toward which we’re heading here with “Swinging for the Fences.”

(Those two ideas, it should be recalled, are:

1) In the human realm, there operate deep and forces that warrant being called “spirits”—not visible to our usual eye, but powerful in their effects.

2) An important part of the human drama can meaningfully and appropriately be described as “the battle between good and evil.”)

It is essential because the idea of “spirit” will refer to forces or patterns that a) move through time, coursing along channels in the culture, and within the human beings who inhabit that culture, animating their actions and b) have persistent tendencies in terms of the nature of their impact on the world, almost “as if” there were something “working” to make the world more that way. And it is essential because among the various and patterns that move that way, and that have such consistent impacts, there is a cluster of them for which “that way” the spirit seems to be “working” to make the world are life-enhancing, constructive, beneficial, while there is another cluster that works in the world “as if” the destruction of what’s beneficial were its “purpose.” Hence the battle between good and evil.

For now, though, let’s just attend to the phenomenon of this transmission of culture, the persistence of patterns, with important elements of continuity even as circumstances change in the world in which the patterns are operating.

Here’s a powerful quotation I recently ran across in a profound book titled The Germans, by the late Norbert Elias. In a discussion of German political culture in the late nineteenth century and the early decades of the twentieth, Elias describes a recurrent pattern, and makes this important observation:

“It is always astonishing to see the persistence with which specific patterns of thinking, acting and feeling recur, with characteristic adaptations to new developments, in one and the same society over many generations. It is almost certain that the meaning of certain key-words and particularly the emotional undertones embedded in them, which are handed on from one generation to another unexamined and often unchanged, plays a part in the flexible continuity of what one otherwise conceptualizes as ‘national character.”

That pretty well sums up what came to me at a crucial moment back in 2004.

I would say that the single key moment which sparked the insight that’s inspired my work of the past eight-and-a-half years –my writing and speaking and then running for Congress—came when “I saw something about the way that those ]dark] forces operate, about how patterns can lurk in the cultural interstices, awaiting the chance to impose themselves again.” This was in the election season of 2004, when the Republican presidential campaign was using the “danger” of gay rights to frighten those people susceptible to such a message, and get them to the polls.

That quote is from my article “The Concept of Evil” (published in 2005 in Common Dreams at ), a piece that I often say is the most important thing I’ve written in at least the past decade. That passage continues to describe what it was that I saw in that revelatory moment:

“When I saw, for example, how that manipulative genius, Karl Rove, effected his seduction of many traditionalist Americans, I recognized an old pattern—one used a century before to seduce poor whites in the Jim Crow South.

“In the Jim Crow South, and now again in Karl Rove’s America, the leaders inflame passions around peripheral issues to distract their supporters from what the leaders are really doing with their power. A century ago, the hot-button distraction was racial purity. Now, the leaders whip people up about issues of moral purity. In both cases, unjust leaders use deception to exacerbate divisions useful to magnifying their own power and wealth.
Elias, in The Germans, noted how a particular political pattern that had been around during the authoritarian years of the Prussian Kaiser came back to attack the fledgling liberal democracy during the years of the Weimar Republic, whose collapse led to the rise of Hitler.

“In America, a pattern that was used for deception and exploitation by exacerbating racial antagonisms came back in our times to achieve similar goals by exacerbating tensions around sexual orientation.”

This pattern Rove took off the shelf of Southern cultural history is not the only place where we can see a deep connection between the darker elements of Southern political culture and the darkness that’s now being expressed through today’s Republican Party. Some of the other parallels are easily identified in concrete political reflexes, like a shocking return of the long-rejected, long dormant doctrine of Nullification and the shocking re-emergence of talk of secession. But beneath these particulars one can discern deeper connections that suggest that a spirit that was active in the South during some wrenching times in American history has re-emerged in our times. (More on this in the months to come.)

Not just LIKE the spirit of old. But the same spirit finding an opportunity to escape from marginality and imprinting its pattern on the country once again.

Dark patterns lurk in the system, like some dormant virus, ready to erupt when the culture’s immune system weakens.

When we talk about transmission of culture, we’re talking about an interplay between the human beings in the system, and the system their embedded in. It is not just that the old pattern from Jim Crow days was in the culture, but the susceptibility to be conned and exploited by that pattern is created in each generation of people growing up.

In the same part of that essay, I wrote:

“Just as a hen has been described as an egg’s way of creating another egg, so also can we human individuals” be seen as our culture’s way of perpetuating certain patterns. Through our socialization and our life-experiences generally our culture creates us —for better and for worse— in its own image. 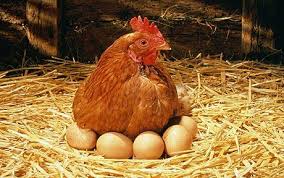 “Sure, people make choices. But the patterns at work in the culture in which we grow up will shape the choices we make.

“History isn’t made just by people; it’s also made by forces.”