Swinging for the Fences: Brokenness as Fragmentation I: Intersocietal Anarchy and the Warping of the Evolution of Civilization

Just as Wholeness’s house has many mansions, so also does Brokenness. For each in the one, there’s a corresponding form in the other. Where wholeness has justice, brokenness has injustice; integrity on the one side is matched against the lack of integrity on the other; beauty and ugliness; honesty versus the lie; harmony vs. discord; life-serving patterns are opposed by life-destroying or life-degrading patterns. And so on.

Brokenness can manifest at the level of the individual, or at the level of a larger system. Indeed, as will be discussed in a later posting, the pattern of brokenness moves from level to level; that is the way it perpetuates itself.

One aspect of brokenness stems from the fragmentation of the system. This was implied in the analysis presented here earlier in this “Swinging” series in the discussion of the warping of the evolution of civilization by the selection for the ways of power described by The Parable of the Tribes.

In such a fragmented system, the individual actors are operating outside of any order to coordinate the whole. The lack of such an order is a form of brokenness, and that lack of order fosters yet other forms of brokenness in the life of the parts and in the way that the whole evolves.

The Parable of the Tribes describes how a destructive force –the selection for the ways of power– emerged as an unintended but inevitable by-product of the emergence of a multiplicity of societies that had made a breakthrough out of the biologically evolved order that had previously constrained them. Operating suddenly outside of that biologically-evolved order, but also without there being any post-biological (deliberately human-created) order to regulate their interactions, a kind of anarchy arose. In that state of anarchy –i.e. with nothing to govern the whole—a struggle for power became inevitable. And inevitably that anarchy mandated that if any element in the system became ambitious to expand at the expense of its neighbors, the ways of power would inevitably spread throughout the whole.

The fragmentation of the system, in other words, made inevitable that the demands of power, rather than the needs of the human creatures, would govern much of how civilized societies would develop.

As I write in “The Parable of the Tribes,” to illustrate the way anarchic situations present people of limited and unattractive choices:

Imagine a fire breaking out in a crowded theater. If someone provides leadership quickly enough, and people respond cooperatively, the anarchy of panic can be averted and an orderly exit attempted. If no order is introduced, the dangerous anarchy of “every man for himself’ can swiftly develop even though no one wants it or benefits from it. A system suddenly emerges which, while itself not designed by human choice, limits the range of choices available to its constituent human members. Each person may find himself faced with the options: “I can stay here and burn to death or I can try to get out at the expense, probably, of trampling others.” Individuals who are neither murderous nor suicidal may he forced to choose between murderous and suicidal courses of action.

When unchosen overarching circumstances foreclose all acceptable options, the subsequent choice cannot be regarded as a free one. The parable of the tribes shows how civilized peoples have been compelled over millennia to make such unfree choices. The anarchic system of civilized societies has indeed been like a crowded theater on fire. (p. 37)

The fragmentation of the system pushes the parts of the system to act in ways that transmit and perpetuate the brokenness. During the Cold War, many spoke of the perilous and potentially catastrophic arms race as indicative of the “insanity” of humanity, or at least of the leaders engaged in the escalation that jeopardized the human future. 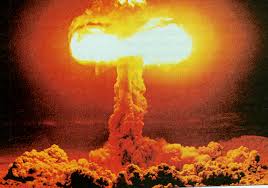 As will be discussed here later, the historical experience of humankind dealing with the problem of power described by “The Parable of the Tribes” has indeed engendered various kinds of brokenness –including of kinds that might be called “insanity”—in human beings through the millennia. But the craziness of the whole, under such un-whole (fragmented) conditions), is not necessarily a sign of the craziness of the human actors.

I write in The Parable of the Tribes,

[I]f we look at mankind as a whole, this conduct of nations makes no sense. But mankind lacks the means to act as a whole, and this is the heart of the problem. Rather, humanity is fragmented into numerous interacting but autonomous decisionmakers, each of whom must act to survive in an environment that can guarantee nothing about security. We return to the image of a panic in a burning theater in which each actor, though sane, may have no choice but to contribute to a destructive collective insanity. The pattern of conduct that would be optimal for the system as a whole may not be a realistic option for any of those acting at the level where decisions can actually be made. (pp. 264-265)