Swinging for the Fences: Brokenness as Fragmentation II– Social Atoms in the Market 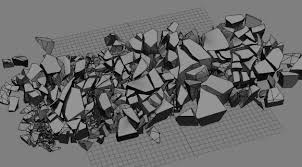 The previous posting discussed how the fragmentation of the intersocietal system represents a kind of “brokenness” that ramifies through the system, engendering other kinds of brokenness and mandating that the system develop in directions that the individual actors would not have chosen but could not avoid.

Something of the same sort is true of the market economy, if the economic system of social atoms buying and selling is not adequately supplemented by collective actions through government to correct for the blind spots inherent in the logic of the system.

There are also, of course, important differences. In the market, the transactions take place within a degree of order enforced by government power. Presumably, market actors –unlike the sovereign societies acting in an anarchic “state of nature” ruled by raw might– are protected from violence. Even in the most laissez-faire of economic ideologies, government has the role of enforcing contracts. In such respects, the economic system affords protections lacking in the intersocietal system.

Nonetheless, elements of fragmentation are built into the economic system advocated by the market ideologues. In the entry Social Atoms vs. Interconnected Society –about the magnet described by my book, The Illusion of Choice—the discussion centered on the problem of “Externalities.” The idea was that the market deals in the costs and benefit of those involved directly in a given transaction, but has no way of taking into account the values of other parties. The specific example discussed was the use of rock salt to deal with winter ice, but the problem of rock salt –which causes systemic damage unreflected in the price—was said to be far more general.

The society that results over time is one rich in some ways and poor in others, the fragmented system producing a mixture “suboptimal for human fulfillment.”

In the subsequent entry, Skewed Menu, Suboptimal Diet, this point is developed further to show how it is that the market –a mechanism exquisitely sensitive to the needs we have as ‘social atoms but disregarding the needs we have as a social community—“creates a society rich in its fragmented parts but poor in its organic wholeness.”

The market, by itself, can lead us straight into a climate disaster of historical proportions. Gregory Bateson once said that “a creature that wins against its environment destroys itself.” That’s because living systems are about a kind of wholeness. They’re about inter-relationship. An uncorrected market is atomistic.

Fragmentation in a completely laissez-faire market economy is a form of brokenness that fosters brokenness in the evolution the society that contains it.