The Report on Torture and a Glimpse of the Dark Spirit 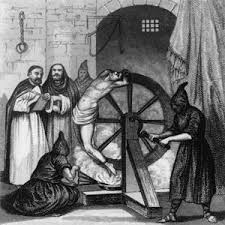 The report confirmed what we all should already know, but that political dissimulation has kept unofficial: the United States engaged in the practice of brutal torture, sanctioned at the highest levels of the U.S. government in a manner unprecedented in our history. This, despite there being no evidence that such practices serve any useful purpose.

If the purposes are not utilitarian, the reasons must lie elsewhere. And here we see the dark spirit. Forget the issues of American law, and international treaty, violated by those during the Bush presidency. Look at the place our leaders were coming from. Torture is as far as you can get from “Do unto others as you would have them do unto you.”

Torture, for which there is no practical reason, is an expression of the kind sadistic cruelty that stains the darkest pages of human history. This is the spirit that finds expression in dungeons, on the rack, in the chambers of the Gestapo. And here it found expression through the people nominated by the Republican Party and re-elected by half the American people.

And prosecuted by no one, including a successor who said we must look forward and not backward.

Is there in America a crisis at the level of the spirit? One need look no further.