Everything One Loves Under Threat 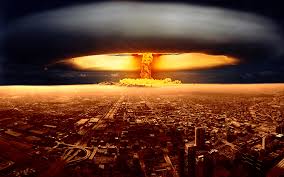 I was born less than a year after atom bombs leveled Hiroshima and Nagasaki. So, like all my generation, I grew up with the knowledge that everything I love might be destroyed– my family, my nation, the heritage of human cultures, the web of life on earth.

With the end of the Cold War, that threat has receded — at least temporarily — if not altogether disappeared.

But once again, I have that same feeling: that everything I love is under threat. The same, but different.

While we lived in the world of Mutual Assured Destruction, there was a particular mega-event that would or would not occur. And we would either be able to continue on as usual, or we would speedily descend into a fiery abyss.

The destruction was hypothetical (and only during the Cuban Missile Crisis did it seem possibly imminent). And meanwhile the world went along essentially intact.

Now, the rise at the center of the American power system of a force at once so destructive and so powerful, so benighted and so thoroughly enmeshed in the nation’s political and economic systems, and in the minds of a large component of the American people, has once again put everything I love under threat.

I don’t know if my children and grandchildren will live in a democracy, or in a plutocracy as ruthless and unprincipled and dishonest as the current machinations of the Koch Brothers.

I don’t know if the American “habits of the heart” (in Tocqueville’s phrase) will reflect the values of compassion and justice or whether the spirit of hatred and distrust will make still more advances in ripping apart our social fabric.

I don’t know if a solid and admirable America will be able to lead the international system toward greater order and stability, or whether the world will break down along all those fault lines around which wars can always occur (like we see these days between the Israelis and the Palestianians and as seems to be rising up like a volcanic energy once again between Russia and the American-led West).

I don’t know if America, with the world’s largest economy, will rise to the occasion of the global crisis of climate change and help lead the way to humankind’s responding appropriately to the threat of a systemic breakdown of the order on which life on earth depends. Or whether it will allow this destructive force, serving amoral and short-sighted corporatist masters, to drive us toward that breakdown, which is already causing the beginnings of a cascade of extinctions.

This threat feels the same in that it weighs upon my heart, and casts a shadow on the beauties and blessings I cherish in my life and in the world around me.

But it feels also different in that the destruction is already happening. Over the past more-than-a-decade, one can see the force of brokenness advancing, leaving brokenness in its wake. More and more, we are already living with the rubble it creates.

It is not a matter of yes or no, but of how much and how much longer.

It is not a question of will we be spared this hypothetical nightmare, but of will we rouse ourselves to push this destructive force away from the helm of our collective destiny.