The Most Shocking of Scalia’s “Voting Rights Act” Remarks 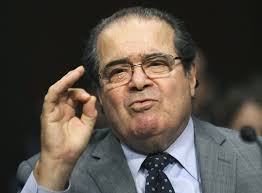 Of the various remarks Justice Scalia made during the recent Supreme Court hearing on the Voting Rights Act, the one that drew the most fire from people who care about justice more than Scalia appears to was his scornful characterization of the law as a perpetuation of a “racial entitlement.

That was not only offensive morally, but also defective in intellectual terms. There’s nothing preferential about the VRA. On the contrary, its intent is to assure that members of a minority group –that has historically been deprived of their rights– are not cheated of those fundamental rights of citizenship by the dominant majority group.

Rachel Maddow’s much-quoted response to this offensive remark deserves to be quoted again:

He’s a troll. He’s saying this for effect. He knows it’s offensive and he knows he’s going to get a gasp from the courtroom…He’s like the guy on your blog comment thread who is using the n-word. … He’s that kind of guy!

But there was something else in Scalia’s remarks that unmasked Injustice Scalia still more: the dismissive manner in which Scalia dealt with the judgment that Congress has made, repeatedly, and as recently as 2006, by a vote of 98-0, declaring that this law, which Scalia evidently wants to strike down, remains necessary.

It was clear to 98 senators, including every senator from a covered state, who decided that there was a continuing need for this piece of legislation”

Scalia then chimed in:

‘Or decided that perhaps they’d better not vote against, that there’s …none of their interests in voting against it.

Not only is this contemptuous dismissal of Congress unsustainable in terms of reason and facts –after all, we know that political figures these days go around passing voting laws to suppress minority voting, so one would hardly expect that political calculation alone would explain a unanimous vote– but it exposes the utter hypocrisy of this supposedly high-powered, supposedly conservative, supposedly strict constructionist judge.

If Scalia thinks his point –even if it were valid– has any relevance to the role the Supreme Court is supposed to play, if he thinks that it’s up to the unelected judges to replace the judgment of elected officials in the making of constitutionally permissible laws, I would like to see this hypocritical “strict constructionist” show me where in the Constitution it says so.

Where do the Framers indicate that they don’t want the democracy they’ve set up to be responsive to the desires of the electorate?

As one commentator says, this injudicious judicial conduct may not be considered grounds for impeachment, but it should be. A Supreme Court judge who apparently has no respect for anything above his own opinions, or prejudices, is a menace to the nation.