Swinging for the Fences: Natural Human Values Not Refuted by Cultural Diversity 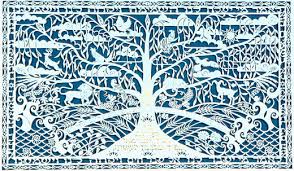 [This is the third of this three-part series on what might be called “A Natural Theory of Values.” Value, I have argued, enters the world with life itself, as natural selection chooses life over death, and as creatures shaped thus are fashioned to experience positive and negative value in correspondence with what has served and what has damaged their species’ chances for survival. The experience of such creatures means that things now matter. Next, I argued that dismissing this dimension of value as “merely subjective” is fallacious, for value must of necessity be a matter of things having experiential value to SOMEONE or SOMETHING, and the human experience of value is no more idiosyncratic than is human anatomy, both being part of the fundamental design of the species. Now, in this third piece, I confront the objection that the range of cultural diversity disproves the idea that an inborn, valid species-wide values –including good and evil– can be reconciled with the fact of a wide range of cultural diversity.]

If man’s nature were given in his biological organism, some argue, this inherent nature would give rise to uniformities between independent human cultures. What we find instead is a wide range ol cultural diversity. History and anthropology demonstrate that human beings can lit into enormously varying cultural environments with correspondingly diverse demands upon their human members. Cultural diversity, in this view, stands as proof of the lack of substantial content in the inherent nature of man: human nature is plasticity.

Although this argument is fairly plausible, ultimately it is not compelling.

In the first place, a substantive human nature would not imply cultural uniformity but only discernible tendencies in human culture. Man requires culture to give his nature finished form. Man naturally walks upright, but the style of walking varies from culture to culture. It is natural for people to smile and laugh, but the precise ways and meanings of smiling and laughing are culturally modified. Man is naturally an overhand thrower, but what he throws and the style of deliver) are influenced by Culture. So, too, with love between people and with contact with the sacred. To the extent that cultures should be regarded as expressions of human nature, the various cultures will tend to be not identical but variations upon| a theme.

In the second place, it is perilous to view all cultures as direct expressions of human nature. To the extent that forces other than those arising from human nature have molded cultures, the- logic of ibis tabula rasa argument Tails. And the parable of the tribes demonstrates that a major subset of human cultures (civilization) has been shaped by such forces.

We cannot accept, therefore, the suggestion by the famous anthropologist Alfred Kroeber that human nature be defined by the limits of all the cultures known in us (1966 p. 207). For in the light of the parable of the tribes, we cannot view an isolated hunting-gathering tribe and a totalitarian empire as equally representative and free flowerings of the nature of our species. Among primitive societies we might find a mirror of our nature. But the inescapable selection for power has so warped our civilized culture that they can afford only a most distorted image of ourselves.

The case for the tabula rasa at last falls back on the incontrovertible fact that human beings indeed have lit into a wide spectrum of different societies, the massive power system as well as the primitive society. If man did possess a substantial inborn nature, how could socialization fit people into such an apparently limit less variety of social environments? We must present our cultures a carte blanche to allow them to write so freely upon us.

The plasticity of man is not. however, proof that man lacks a substantial organismic nature. The proponents of the tabula rasa view would have us conclude from our evident flexibility that we are each born like a lump of wet clay without any intrinsic shape of our own. But I propose a different image: our flexibility is like a wire of spring steel capable of being bent in many directions but always straining against the pressure, always trying to assume its original shape.