Powers that Like “Sin” Confined to Small, Private Matters

On Daily Kos, a reader commented on my piece (which has also appeared here) on “Externalities.” She said:

“[W]hen the externalities can be expressed in terms of ‘sin’, our system has no problem in levying punitive taxes to recapture external costs from buyers. We see it coming in regards to the costs of obesity, which can be attributed to the medieval concept of Gluttony (without acknowledgement that in historical context, Gluttony and Greed were twins. But when the “sin” is a cost to society as a whole via the market as a whole such as the road/salt example, with no moralistic component, the political and propaganda apparatus revolts at violation of Free Market ideology.”

I expanded on her point in this way:

“It is in the interests of much of the power in this society for moral issues to be seen by people just in terms of the character, or lack of it, and purity, or lack of it, of private individuals. This focus –abortion, gay marriage, addiction, etc.– can be used to distract people from the damage caused by systemic defects.

This phenomenon of focusing on individual defects rather than systemic problems applies to the issue of externalities, but also as the above examples indicate, to a whole lot more. I’ve lived in rural Virginia for most of the past twenty years, and I’ve had a chance to see how this works to get people all up in arms about nickel-and-dime misdeeds, and blind to this misdeeds that happen on a larger scale.

“This problem is only partly about how power works to protect itself. Another very important component of this distorted sense of where the moral issues of our society lie is that thinking about issues at the human scale is something we’ve been doing, as a species, for tens or even hundreds of thousands of years. We’re naturally attuned to that level. But thinking about the huge systems that have emerged with our civilization –international, political, economic, etc.– does not come naturally. That kind of awareness tends to depend on levels of education and of intelligence that are not as widespread as the capacity to process gossip.

“The two factors –the intentional manipulations by the power systems, and the need to elevate and educate human awareness– we’ve got the problem you describe.” 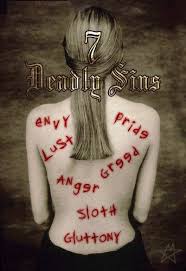